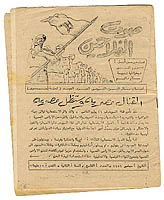 Since the early 1990s the IISH has expanded its activities to the Arab Middle East. At first it concentrated on Egypt and the Sudan, but gradually more countries were included into its field of operation. Attention was focused first on the communist movement in all its forms: forerunners of the communist movement, the rise of the movement itself, and the activities it fostered, such as cultural clubs, trade unions, women's movement.
This does not necessarily mean that the IISH will not pay attention to other movements in the future. In fact, the IISH upholds a broad concept of social movements, covering both secular and Islamist movements. The main criteria are that these movements should promote the cultural, political and economic emancipation of the oppressed.

Preserving the history of social movements in the Middle East

The Middle East section of the IISH has two main goals. The first goal is to collect documents and publications of social movements in the Middle East and to preserve them for posterity in the best conditions. Because the historical heritage of social movements is threatened with confiscation by the state, or at least cannot find a safe haven in the national archives in most Middle Eastern countries, it is essential that they can be preserved in a professional neutral archival repository. The second goal is to make this historical heritage accessible for research. This task of the IISH is facilitated by making detailed inventories of the received collections. In this manner both scholars and the interested general public can quickly find their way in the collections.

Although the IISH does not in principle search for archival collections, it has recently started to actively acquire collections. As the Middle East section is especially interested in promoting comparative research on social movements in the Middle East, it also tries to collect exemplary organizations from different countries. Another task of the IISH is to accumulate information on the whereabouts of collections.

The IISH obtains the collections it has in its archives in different ways. Most collections of documents of social movements are donated to the IISH. As it is the easiest arrangement for both the owner and the IISH, this is the preferred manner of acquisition. However, it is also possible to deposit collections at the IISH and leave them in the care of the Institute for a certain period of time. Collections can be kept in safety at the IISH until a certain moment in the future when the political situation in the country of origin has stabilized and the movement has the means to preserve them itself. In this case, the IISH always recommends the donator to keep a copy of the documents or the originals themselves at the IISH. Whatever arrangement is made, conditions for deposit are always stipulated in a contract between the owner of the documents and the IISH. These stipulations also determine whether all the documents are freely accessible.

Through its activities over the past few years the IISH has been able to obtain rare documents covering important periods in the history of the left in Egypt. Besides acquiring documents of the first wave of the left in Egypt during the beginning of the last century (Isam al-Din Hifni Nasif) and documents of the second wave of the communist movement after the Second World War (Haraka al-Dimuqratiyya li-Taharur al-Wataniyya and Tali'a al-Ummal), the IISH was able to cover the period after the dissolution of the CPE in 1965.

As can been seen in the list of inventories, the collection of documents of the left and communist movement in Egypt is considerable and covers most periods and includes some of the most important groups. Major acquisitions consist of the collections of the Rome Group, which includes all the documents of the Jewish support group of the Egyptian Communist movement, as well as all the writings of Henri Curiel himself. The other major collection is that of the Workers' Vanguard covering the documents and publications that this group issued between 1946 and 1956.

Apart from Egyptian Communist movement the Arabic section of the IISH gave priority to collect documents of the Communist Party of the Sudan. Partly this step was inspired by the close historical relations between the Egyptian and Sudanese communist movements. By 1999 the IISH had received most of the material the CPS had brought into safety either in Great Britain or elsewhere in Europe. Other countries and regions from which the IISH has obtained collections are Iraq and Palestine.

In future the Arabic section of the IISH intends to expand its activities to more countries in the Middle East. Presently the section has contacts with the Bahreini socialist movement and the Communist Party of Lebanon. It also plans to extend its facilities and services to movements in their home countries by assisting them in making inventories of their collections and make them accessible for research. The possibility of digitalizing collections is being investigated. When this option is feasible the problems of transport and accommodation, which for most organizations are prohibitive, will be overcome.
The IISH also intends to expand its activitities to other social and political movements that have acquired a broader following in the Middle East during the past decades.