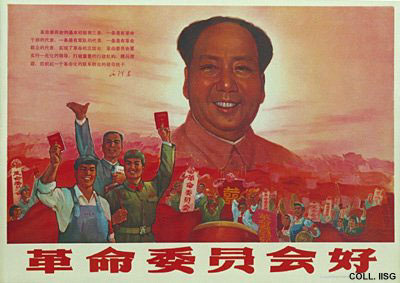 To overcome the total chaos brought about by the Red Guards, a new type of organization is introduced: the Revolutionary Committee. Revolutionary Committees consist of workers (representing the 'revolutionary masses'), soldiers and party cadres, like the group at the left. They are waving Little Red Books and Mao's Collected Works, the banners repeat the slogan 'the Revolutionary Committees are good'. Mao's face is in the place of the sun, with light glowing behind it.
During the Cultural Revolution, an estimated 2.2 billion portraits of Mao are produced. Images of Mao are subject to very strict conventions. His face has to be painted without conspicuos brushwork in reddish, warm tones, with burnt sienna for shading and yellow ochre for highlights. The use of blue, green or black in Mao's face is strictly forbidden.
top